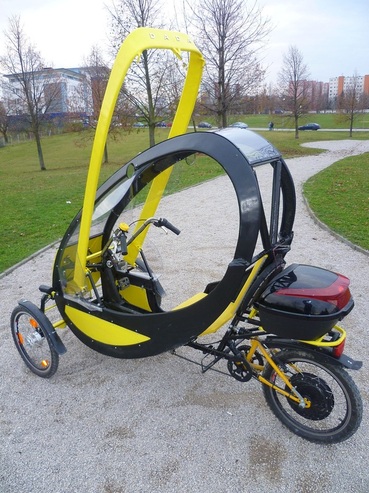 Car-like amenity
The biggest selling feature of the urban tricycle is obviously that it is an electric bicycle with nearly all of the comfort, safety and weather protection of car. It also offers many of the most important creature comforts of a car, such as instrumentation, wipers, an entertainment system and a huge lockable carrying capacity. In addition to its own weight of additional 150kg, including the weight of the rider, making it ideal for the city bike rental and inner urban delivery vehicle markets.


It is as a commuter vehicle that is the biggest potential though. It can ride on the bike path, it can mix safely with traffic, and the amount of energy it uses when being replenished may well be insignificant on your electricity bill.

The purpose of this vehicle is to enable anyone to commute in a degree of comfort and with more safety than on a normal bicycle. It is not a substitute for a sporting cycle but more of a substitute for a car. To that end it has the size and economics of a bicycle with the amenities of a car.

The electrical assistance and weather protection enable a rider to ride in their normal clothes and arrive ready for work or play vs all sweaty or soaked and worn out, and because it is enclosed, no helmet is required to be worn."

Suspension is on both front and rear end. It also must have handbrake for parking.

Access to the bicycle lane with an enclosed bike will be a novelty, particularly one which will power along comfortably at 25 km/h (15 mph) - a speed not achievable on a human-powered bike without some exertion.

Using the bicycle lane whenever possible is necessary for safety. On the roads, a disproportionate number of fatalities occur when vulnerable road users (bicycles and motorcycles) mix with less vulnerable (cars). In this regard, the urban tricycle is significantly safer in its intended environment, and much safer than a naked bicycle when forced to mix with cars.

In my experience, the direct routes offered by bicycle paths often make commuting by bicycle much faster than a car in inner urban environments. Bicycle paths usually go straight through parks, whereas cars usually get to go the long way. Bikes almost always have privileged access lanes which bypass major traffic lights and other time-wasters, and the bicycle path never gets as congested as the road.

Hence the urban tricycle offers a genuine alternative for commuters.

How much power can a human being produce? The urban tricycle is a human-electric hybrid drawing its energy from two sources - its batteries and the human riding it.

The biggest difficulty in comparing the output of an animal and a machine, is that engines don't tire, while horses and humans tire quickly. Humans and horses can both produce prodigious horsepower in short bursts, but this drops away rapidly.

Once upon a time, we'd have struggled to address this issue accurately, but the invention of the cycle power meter has changed all that. Now we can accurately visualize the levels of horsepower that human beings can sustain over time.

The biggest enemy of performance and/or efficiency in any form of motorized conveyance, from a racing car to an ecomarathon special, is weight.

This makes the urban tricycle unique, because it is so light, that it almost defies comparison with conventional forms of transport.

If the Volkswagen up! (below top right) weighs nearly 20 times as much as the urban tricycle, it will obviously require 20 times more power to achieve similar performance levels, and 20 times more work to achieve the same result.

Premium green cars such as the Toyota Prius (1,380 kg/3,042 lb - above image bottom right) and Honda Civic Hybrid (1,250 kg/2,756 lb) can have all the aerodynamic tweaking you like, and they're never going to achieve the frugal energy usage of a vehicle that weighs just one thirtieth of the mass, and has a frontal area of one third.

Even in comparison to the humble scooter, the urban tricycle is considerably lighter and hence has a big advantage in terms of efficiency. It is so light that the electric assist will offer pretty quick acceleration - you will still need to pedal a bit, but not very much, as the emphasis of the urban tricycles to enable people to wear normal clothes and not to need to exert themselves.

It also makes a lot of sense in personal transportation to have a vehicle which isn't range sensitive - the thought of being left stranded with an empty battery rates for most people somewhere on the fear scale between a trip to the dentist and public speaking.

As the urban tricycle is perfectly usable without electric assist, becoming in effect a heavy bicycle, it can be safely used until the batteries are exhausted, and you'll still get home with minimum fuss.

In conclusion The urban tricycle seems to have all the boxes ticked as far as a future participant in the personal transportation arena – it is something viable that appears to challenge conventional transport solutions and achieve a level of energy efficiency that cars will never get even close to.

Extract from  The Emcycle by Mike Halton 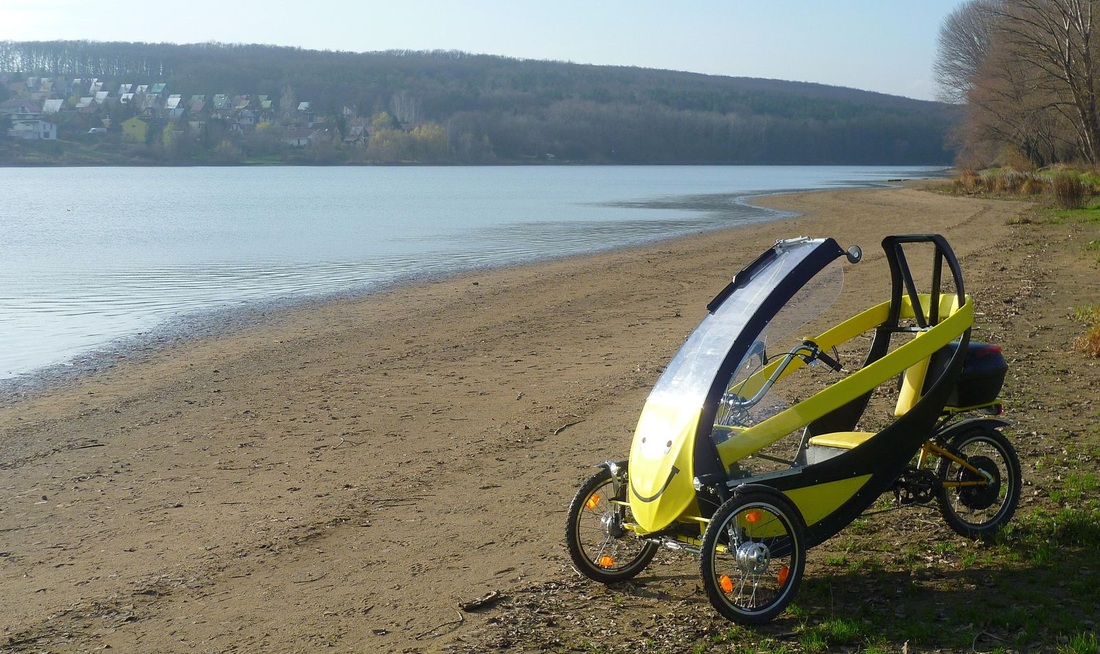 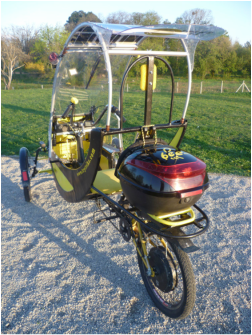 “In today world there are three major concerns which are always being addressed in the media: money, health and the environment. Project of human powered urban tricycle sets out to design and manufacture a product which can appease each of these issues.

Initial research showed that a new form of human powered vehicle could be designed to encourage more people to cycle. This would benefit the rider’s health and financial situation while at the same time improving the environment by reducing pollution and the consumption of finite resources.

The aims of the project are to help those not accustomed to cycling, those with physical problems and enable them and many others to take up cycling. The project also set out to solve some of the current disadvantages of cycling and improve the comfort of human powered transport.

The product has delivered these requirements. The motor in assisted partially enclosed tricycle enables longer distances to be travelled with less effort from the user. The recumbent position is the most efficient method of pedalling which makes the urban tricycle efficient and comfortable for use by anyone. The half shell protects the user from the elements and the third wheel improves stability. It has a stylish, modern and clean appearance making it attractive and desirable. Other noticeable improvements such as storage and lighting must bee incorporated into the design making the urban tricycle not only user friendly and efficient but also practical for daily use.

The urban tricycle shares many of the advantages of the car but produces zero emissions. All these factors combine to produce a new elegant form of transport which incorporates into a healthy lifestyle. It aims to change the views of cycling and produce a society with better health, more money and greener attitudes towards the environment.”

Extract from E-trike by George Cooper 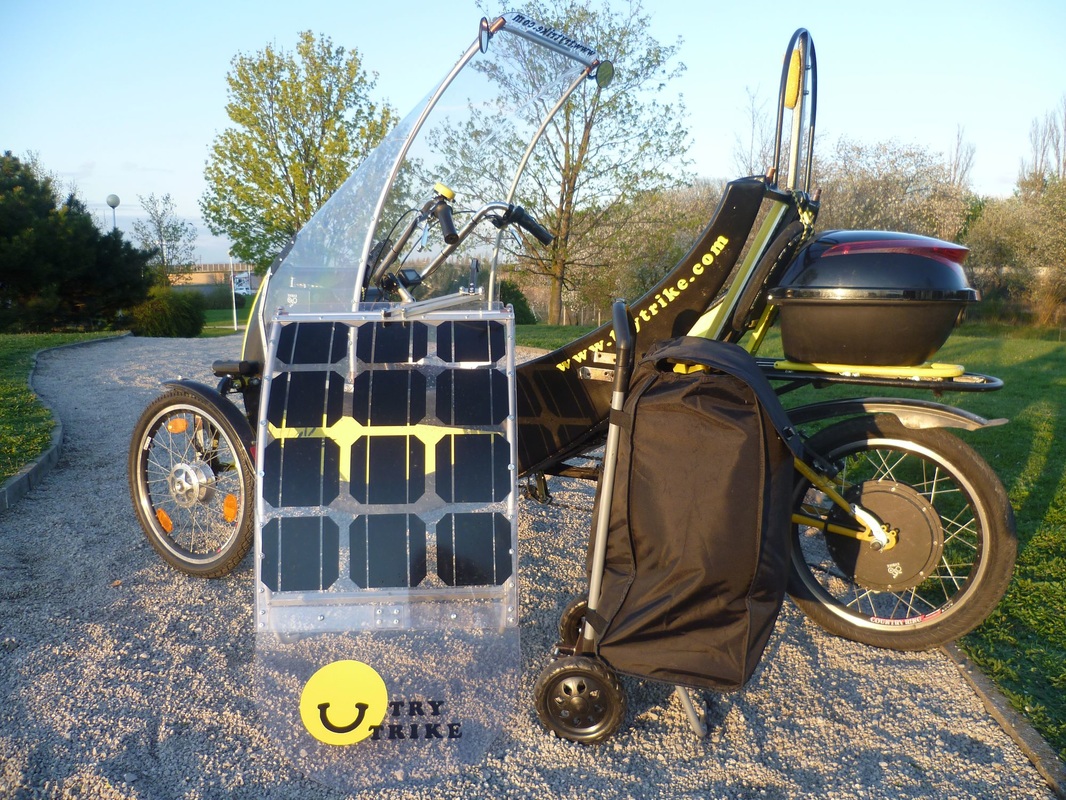